Why Are Elephants Endangered Species?

There is no more iconic symbol of wildlife conservation than the noble elephant that marches the plains of Africa and the jungles of Asia. However, while the elephant is admired everywhere for its intelligence and emotional complexity, it is under assault from all sides and is tragically facing extinction.

And, if findings from a recent conservation conference in Botswana are to be believed, this is something which could happen as soon as 2025, leaving us precious little time to act.

Where do elephants live and why are they important for the environment?

There are two major species of elephants, African and Asian.

So wherever an elephant wanders, it is obvious that their habits of eating and drinking alone will impact their environment. Their large impact makes them a keystone species, that is a species crucial for maintaining the numbers and diversity of other species.

The removal of a keystone species has a cascading negative effect on the entire ecosystem [5].

The savannas exist as the grasslands they are because the elephants push down trees and devour the low shrubs. In their foraging, elephants knock off the seed pods of the acacia trees for warthogs, kudus and baboons to consume. 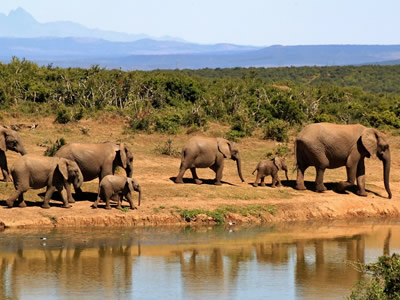 Consider too that an average elephant produces 250 pounds of manure a day. Elephant dung, containing 50 percent of the original nutrients consumed, as their digestive systems are notoriously inefficient, sustains a platoon of wildlife believed to include monkeys, baboons, hornbills and mongoose as well as many insects, like dung beetles. Small ground animals feed off the grubs and insects.

Some suggest that the dung actually provides a habitat for many insect species including ants, centipedes, scorpions, crickets and spiders and recently in Sri Lanka, three species of frog were found to “reside in” dung [7].

The dung too contains seeds from trees as far as 40 miles away. Because the seeds are already in fertile soil, the chances of germination are greatly increased.

For this reason, elephants are credited with the spread of the Balanite tree, highly valued for subsistence in these areas of frequent famine as each part of it can be used for some purpose: food, medicine, cosmetics, fuel, pesticides and fodder [8].

Further reading: The Role of Elephants in Maintaining a Healthy Ecosystem

Elephants create paths through the forests which can be used by other animals and humans. And in digging in dry riverbeds for water, they create holes which reach the water table and trap rain.

Hunting elephants for ivory and sport has reduced their numbers by 50 percent over the past century.

It is estimated that there are 415,000 elephants left on the African continent.

The population of Asian elephants has declined 50 percent over the past three generations and are still declining. It is estimated that between 40,000 and 50,000 remain in the wild [1].

Even though many initiatives have been implemented to reduce poaching for ivory and a couple of the south African species have not only recovered their populations but are growing, on the whole elephants remain at risk of extinction, with the Sumatran species of Asian elephants closest to the brink.

Threats to elephants: Is poaching the main threat?

The restrictions on ivory trade have been deemed successful in many regions, though declining populations due to poaching are still being reported in central Africa [13]. Still, the focus is shifting now.A massive unregulated market still exists and is the primary threat to elephant populations.

It is driven by demand from wealthy Asian and Western countries and although 46 countries recently pledged to strengthen protection for elephants, a CITES monitoring program showed an estimated number of 20,000 African elephants killed by poachers for their tusks in 2013 and similar numbers were reported for 2014, despite the new regulations.

Over 60 percent of carcasses studied across the African continent were found to have died due to poaching. If more than 50 percent of deaths come from poaching, this causes a downward spiral that is difficult to halt, as populations struggle to maintain their numbers naturally.

Certainly, the rampant poaching has caused a number of effects that continue to contribute to further decline, most notably the tendency of poachers to kill the largest animals of the herd who are generally the matriarchal leaders of the herd, responsible for guiding the herd to find food and water.

This is leaving herds with juveniles who do not know where the water and food sources are [14]. Not only are they lacking in knowledge, it is likely that the killing of the mothers has caused more profound destabilizing effects.

Elephants have been found to be very sensitive, evidently caring deeply about each other, mourning the loss of herd members, treating their bones tenderly and even pausing at the site of death at a later date as though paying a silent homage.

There is much we do not know about their internal communications as they take place below our range of hearing. Although “purring” has been noted, it has been found that males, who are usually solitary (the herds being composed of female adults and children), actually continue to communicate with the females from miles away [15].

So it is possible that the impact of the fragmentation of the herds from poaching is greater than we understand.

Increasing fragmentation of elephant populations is also being caused by other threats that we do not have a comprehensive plan to address.

Illegal trapping of elephants from the wild continues to supply the tourist and lumber trades (for use as work animals) in Thailand and Myanmar. The buyers employ brutal techniques to “crush the spirit” of these wild animals to domesticate them, known as phajaan. Something to bear in mind if you find yourself seeking an elephant ride or watching an elephant perform in the circus or on the streets in one of these countries [3].

But illegal wildlife trade and trophy hunting are not the only risks.

Today, an even more significant risk pushing elephants toward extinction is the loss of their habitat. Elephants require a lot of space.

For example, Asian elephants used to roam from Syria to northern China and the Indonesian islands. Now, with only 15 percent of their habitual territory available, they can be found only in isolated herds in India, Sri Lanka, and Southeast Asia [4]

As human population continues to increase and development expands, the elephant’s habitat is further closing in.

The close proximity to humans is not only destabilizing the social organization patterns of the herds, it is provoking increased incidences of conflict, with elephants killed by humans to protect food sources and family.

Habitat loss affects elephants more than we are willing to accept

Ancient migratory routes and foraging ground have been reduced due to climate change or destroyed to make way for expanding settlements. Humans are moving into the habitat of elephants, building roads, businesses, homes and sometimes creating big plantations, for products like palm oil.

According to the International Union for the Conservation of Nature, the Sumatran elephant has lost nearly 70 percent of its habitat since 1985, reducing its population to around 2,500, leading to increased human/elephant conflicts and to its Red List status of ‘critically endangered’.

In Africa, WWF estimates that elephant ranges have shrunk from 3 million square miles in 1979 to around 1 million in 2007 and which has been caused by civil war, logging and mining.

The problem is particularly pressing in South East Asia, where Conservation International estimates only five percent of irreplaceable jungle remains, but many forest restoration projects are underway. Organisations such as the Save Elephant Foundation work with communities to restore lost habitat and educate locals about the importance of maintaining a balance between humans and wildlife.

Elephants can efficiently demolish a family’s garden or even a plantation over very little time. Due to their enormity, elephants can be frightening. In response, farmers and concerned citizens are shooting, poisoning, electrocuting and setting traps for elephants [16].

More peaceably, innovative piecemeal measures are being implemented to protect crops, like the “chili bombs” made of chilis and dung, repugnant to the elephant’s sensitive olfactory senses and thus effective in discouraging elephants from approaching and raiding maize crops in central Africa [17].

Elephants are afraid of bees [18]. Perhaps surrounding a pasture with beehives would discourage rampant foraging.

More steps must be taken to facilitate coexistence, more comprehensive plans developed to protect both humans and elephants.

For example, it could be that a better answer to the preserves now being created and marketed for ecotourism would address the need for migration by creating corridors to other reserves. There could be ways to discourage roaming elephants from certain areas.

How can we save elephants from extinction?

International concern over the declining numbers of elephants prompted a complete ban on the ivory trade by the Convention on International Trade Endangered Species (CITES) in 1990.

Some governments have taken aggressive measures to catch poachers and staunch the flow of contraband as poachers use increasingly sophisticated techniques to conceal their activities as black-market prices for ivory soared. Most recent reports show that the black-market price for ivory has fallen [9].

Although results of government measures has been positive, the support for banning ivory has not been universal.

In Zimbabwe, South Africa and Botswana, people farm elephants on ranches for trophy hunters, arguing that ivory trade should be simply regulated, not banned. And last spring, the US lifted its ban on importing sport-hunted trophies of elephants from certain African countries [10].

Other actions that can certainly make a difference include:

Initiatives against elephant poaching are rising

The good news is that many initiatives are in place to help conserve elephants. World Wildlife Fund has established protected zones in countries including Mozambique, trained wildlife managers in Cambodia and Lao and worked with governments to identify illegal trade routes and shut down suppliers.

Furthermore, Bloomberg Business reports that an innovative private sector initiative in Tanzania plans to use unmanned drones and other technology to monitor poacher movements, helping law enforcement officials to track them down.

What do elephants need to survive?

It appears that elephants need a lot of fresh vegetation, water, community with each other and space.They may need to take ancestral migratory routes.Studying the behavior of herds should reveal how a particular herd moves and its optimal living conditions.

Creating an environment that satisfies these conditions is the only way elephants will be able to survive the human population explosion.

A future without elephants is a worrying. Not only do they provide vital ecosystems services that maintain biodiversity, but their presence is a humbling reminder of the majesty of nature.

A world without elephants would represent a tragic loss but despite our best efforts, it is looking increasingly likely.

Greentumble was founded in the summer of 2015 by us, Sara and Ovi. We are a couple of environmentalists who seek inspiration for life in simple values based on our love for nature. Our goal is to inspire people to change their attitudes and behaviors toward a more sustainable life. Read more about us.

While heavy machinery keeps spraying #monocrops with #pesticides and #fertilizers, millions of #family #farmers are applying agroecological approaches to redress those impacts and revive #rural areas. What is the key to their success?
🔎https://t.co/179Z5AnYTw pic.twitter.com/Qw7hXuBBQK